I would like to extend my sincerest sympathy to those affected by the recent Tohoku/Kanto earthquake in Japan. I hope all of your familes and friend are safe and sound.

It has been a busy few months for me and that along with the fact that the Real Estate marketing in Los Angeles/Orange County has been trodding along sideways with no major change has prevented me from blogging recently.

In October 2010, I went to Washington DC to join the First Annual US-Japan Council Meeting. The US-Japan Council is headed by Irene Hirano-Inoue (wife of Senator Daniel Inoue) and it is an organization with a goal to advance Japanese American cause. Most Japanese Americans can probably be separated into ancestry which migrated to the US/Hawaii in late 1880s to early 1920s with the Issei’s and Nisei’s experiencing encampment. The decendants of this group is probably in the 4th and 5th generation like me and my children. Another group may be the Japanese immigrants that came after around 1970s who are Issei’s and Nisei’s now. The issue with the earlier migrants was that they were badly segragated and thus try to integrate in the American community, they are now in the 4th and 5th generation and can no longer speak Japanese, and has long lost touch with their relatives in Japan. The Issei’s and Nissei’s married outside of the race at a single digit percentage, but the 3rd and 4th generation are marrying outside of the Japanese race at a rate of around 40%. The concern here is that loss of identity for the Japanese Americans as they are more and more assimilated into the U.S.

Is this assimilation bad? No, not really. But a loss of culture and loss of your origin can be a critical issue. US-JC is trying to network all the Japanese Americans and to help connect them back to Japan so we can be reminded who we really are. In any case, attending the meeting was a very enlightening moment for me and my identity.

I did not know much about how my great grand parents, grand parents, and my father lived in the U.S. But I learned a lot about them through my association with the US-JC. Also, there were recently two movies made by Director Junichi Suzuki which are titled “Toyo’s Camera” which is the story of the Japanese-American internment through the lens of famous photographer Toyo Miyatake and “442” which was a WW2 military unit composed exclusively of Japanese-American Nissei’s and fought the war for the US in the European front. Senator Daniel Inoue is a hero from the 442 unit and he is currently the Senate Pro Tempre of the United States which means he is third in line for US Presidential succession after Biden and Boehner. A Japanese-America third in line? That is amazing….

This led me to go to the Japanese American National Museum (JANAM) in Little Tokyo in Los Angeles to learn more about the internment. You must take the docent tour, but it is quite interesting. More than anything, they have an extensive record of Japanese-Americans and I was able to find records of many of my ancestors.

Finally, Japan’s Tokyo Broadcasting Station (TBS) broadcasted a 5-part mini-series (10 hours) in the summer of 2010 title “99 nen no ai–Japanese American” which translates roughly to “99 years of love–Japanese Americans” and follows the history of a Japanese person who migrated to the US. I believe this is the best put together story to get a sense of Japanese American history and hope it will be translated into English one of these days.

When you look back to the late 1800s and the early 1900s Japanese migrant, they look the exactly the same for Mexican migrants coming into the states now. I hope it won’t take the Mexicans a 100 years like the Japanese to truely earn a position in the United States.

But I digress massively… Back to Real Estates.

Looking at Los Angeles County Single Family Homes, prices peaked during May to August 2007 ($550,000), then it tumbled to a bottom during January to May 2009 ($298,000), and then it took off upwards with the Tax Credit, but has stumbled after the expiration of the tax credits and the pricing is now going sideways around $340,000.

The chart below show the median price action for Single Family Homes in Los Angeles County. 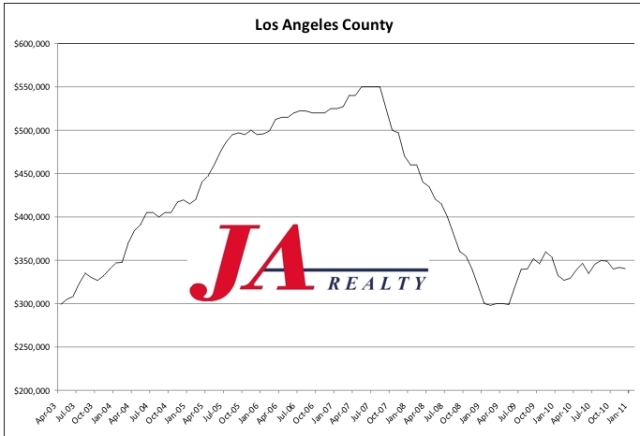 I attended the Union Bank/Bank of Tokyo economic forecast seminar hosted by JBA (Japan Business Association of Southern California) and learned that the consensus view amongst the economist is that the real estate pricing has hit a bottom and it will not fall further. They expect prices to climb gradually and reach the 2007 peak again around 2015 to 2020.

US GDP is showing positive growth as we exit the recession. But the problem remains unemployment. Many people lost jobs during this recession, but even if they are re-employed it is expected to be at a lower paying job. So, not everything is rosey looking into the future.

The Federal Government can continue to borrow money and operate even if they are running a deficit (which actually is a strange situation) but State and Local Government must balance their budget and cannot operate at a deficit. A such, with the reduction of tax revenues, State and Local government is still shrinking. US seems to have emerged from a recession, but California unemployment is still at 12.5% which is the second worst in the Union, so it looks like we got a little more to get out of our “local recession” here.

So the first point is “Los Angeles property prices has hit a bottom and there is no further factor for fearing further decline.” The prices are moving sideways as we speak, so you can still buy property for pretty cheap.

You can’t talk real estate without talking about loans. Currently, banks are writing 30-year fixed rate loans at around 4.875% for people with good credit scores. A while back it hit a low of 4.5% and the rate is on the rise, but historically, it is still a very low interest rate today. There was a period where it was very difficult to get a loan, but it seems now that the credit market has eased up a bit and if you have good credit, 20% down payment, and a solid job, it’s not difficult to get a loan anymore. Getting properties appraised at a proper price was also difficult but as the prices are no longer declining, it seems that the appraisers finally got sense and are making appraisal at a rate we consider to be fair so this is not a concern either.

However, not everything is rosey on the loan front. There is an issue with what will happen with Fannie Mae and Freddie Mac. Fannie/Freddie creates the secondary market for loan which takes the mortgage and turns them into investment vehicles. Without Fannie/Freddie, the loan market is feared to freeze up again like it was back in the 1920s when you had to have 100% cash in order to buy a property. Another concern is how Wells Fargo is petitioning the government to increase the minimum down payment amount to 30%. The reason being that the banks won’t get hurt as much if we are hit with another recession like the one we just had.

So, the second point is that it may be more difficult to get a loan down the road, as well as the interest rate rising as economy improves.